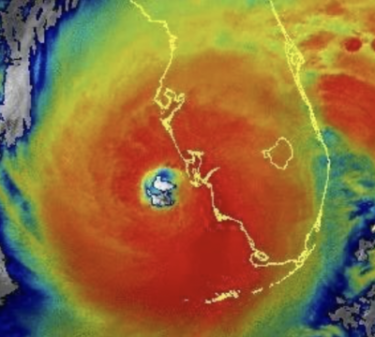 I live in Florida and that means hurricanes. Currently one is brewing and all of Florida has been put on alert. That makes me think of the Destroyer Archetype. The Destroyer comes in many shapes and sizes – any natural disaster (fire, flood, tornado, hurricane, earthquake, draught) but also in human versions – war, temper tantrum, addiction to drama, a car accident, an illness, a divorce, a pandemic, breaking a cycle of abuse or addiction, chronic pain.

Death and destruction result. One of its main identifying characteristics is chaos. You don’t exactly know where and when it will land, and you can’t predict the amount of resulting damage. It can come about anywhere, anytime and wipe everything out in a flash. It can affect the good, the bad, the ugly, the innocent, the guilty, the deserving and the naïve.

Stacey Couch, Spiritual Director, and Archetypal Consultant, suggests predictable stages of the Destroyer cycle. The first is the evacuation – it might entail only to be able to duck and cover your head to avoid a blow from a victimizer, swerve to avoid a car crash, or it could be several days’ notice of the impending doom and flee to higher ground.

The 2nd phase yields the seeking of shelter. This might be in your own bathtub, or it could be uprooting the family, pets and essentials to a local shelter or you get the heck out of dodge to safer ground.

The next phase is what we call in emergency situations “surveying the scene”. Once the danger is over it’s necessary to assess the extent of the damage. What has remained that is recognizable and can be re-claimed?

The next stage is those of the potential aftershocks. There may be more in the wake of destruction before the final settling down and petering out. Sometimes we are anxious to get back to normal and begin to re-establish, but the Destroyer event may have more steam and has not fully “run its course”

The last stage is the beginning of new life that survives the devastation. This might be where a baby deer survives, and the mother doesn’t. Or it’s the realization that the land is more fertile than before, and the seed pods take root in a stronger and more viable way, giving way to new growth.

Metaphorically think about what needs to be destroyed in your own life to pave the way for new growth, new seedlings, nurturing creation. Remember back to times from the past when you didn’t think you could survive a situation – a financial disaster, the intense agony of grief, even moving to a new location. These times gave way to new insight, new behaviors and you were able to glimpse the light at the end of the tunnel.

The Destroyer archetype may use up power from others through physical or emotional means. Perhaps the Destroyer rapes the environment for private financial gain. Maybe it’s a revolt against the established system or limiting thought pattern. Examining the motivation behind the Destroyer points to the placement on the light/shadow spectrum.

Another characteristic of the Destroyer is resiliency – you didn’t know you had it in you. It is that cycle of death and rebirth. She initiates change – the only constant there is. The Destroyer can create something greater, bigger, better than before. To create something new, something has to let go and fall away.

The Destroyer points to the paradox – the destruction and the creation aspect are held equally. We also realize we have no control and lastly, it brings us in proximity that nothing is lasting. From this realization, we can learn to rebuild a more authentic foundation and learn to value living in the moment.